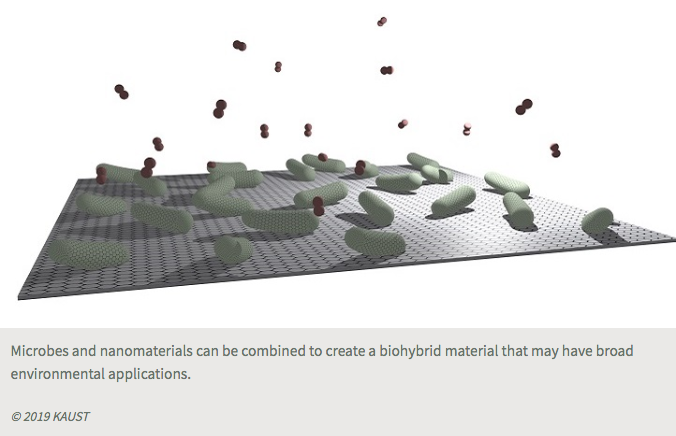 Mixing microbes with carbon nanomaterials could help the transition to renewable energy. KAUST research shows microbes and nanomaterials can be used together to form a biohybrid material that performs well as an electrocatalyst. The material could be used in the solar-powered production of carbon-free fuels and several other green-energy applications.
At the heart of many clean energy technologies is a process called the oxygen-evolution reaction (OER). In the case of solar-fuel production, for example, the OER enables the use of solar electricity to split water molecules into oxygen and hydrogen, producing clean hydrogen that can be used as a fuel. Currently, rare and expensive metals are used as OER electrocatalysts. But graphene-based biohybrid materials could make an inexpensive, eco-friendly alternative, Pascal Saikaly and his team have shown.
Graphene—a sheet of carbon that is just a single layer of atoms thick—and closely related reduced graphene oxide are highly conductive, mechanically robust and widely available. However, they only become active catalysts once they have been doped with other elements, such as sulfur, iron, nitrogen or copper.

“Usually graphene-based OER catalysts are developed by chemical methods, which require rigorous reaction conditions, such as high temperature and copious toxic chemicals,” explains Shafeer Kalathil, Saikaly’s former postdoc. A more environmentally friendly alternative is to use microbes to decorate the surface of the reduced graphene oxide. “We used the electric bacterium Geobacter sulfurreducens because it is nonpathogenic, rich in iron-containing proteins and abundant in nature,” explains Kalathil. 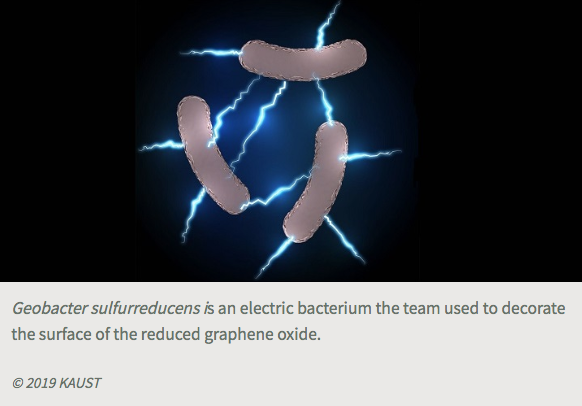 When the team mixed the bacterium and the graphene oxide under oxygen-free conditions, the bacterial cells adhere to the surface and produce iron-rich proteins to interact biochemically with the graphene oxide as part of their natural metabolism. As a result, the reduced graphene oxide ends up decorated with iron, copper and sulfur; thereby, becoming a highly efficient OER electrocatalyst.
“The elements contributed by the bacterium transformed the catalytically inert graphene into a highly electrocatalytic one,” says Kalathil. “The biohybrid material’s OER activity outperformed the benchmark expensive metal-based OER catalysts,” he adds. The bonus is the environmentally friendly method the team used to make it.
Saikaly and his team are now working on large-scale production and commercialization of this biohybrid catalyst and developing other types of biohybrid catalyst for other important electro-catalytic reactions, such as hydrogen-evolution reaction and carbon-dioxide reduction.